What’s the difference between you and me?

Posted on January 5, 2020 by Stephen English 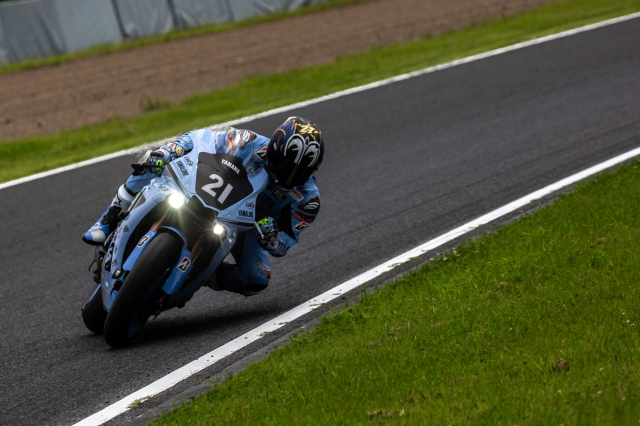 Why is the Suzuka 8 Hours dominated by Bridgestone tyres?During last year’s edition Michael Laverty and Sylvain Guintoli sat down to explain why nothing makes the competition sink like a ‘stone

Even the most talkative factory riders get tight lipped when the topic of tyres is raised. After taking nine tenths of a second off the unofficial lap record Jonathan Rea was asked to compare the feeling with Bridgestone tyres compared to the Pirelli rubber used in WorldSBK. The triple world champion sidestepped that landmine with customary ease by saying “they’re both very high performance tyres.”

There are however some outliers in the Suzuka paddock. Some riders are able and, most importantly, willing to talk on the record about the brands. Only a handful of riders have experience with both tyres, and Michelin MotoGP tyres, and even fewer have the freedom to speak about the contrasts. Both Michael Laverty and Sylvain Guintoli however have that experience of the three brands. Going back to the early days of Michelin’s return to MotoGP Laverty, then Aprilia’s MotoGP test rider, helped the French manufacturer define their initial batches of tyres.

Speaking about the contrast between the Bridgestone shod front runners at the Suzuka 8 Hours and bikes using Pirelli tyres, such as the BMW that the Northern Irishman raced 12 months ago, he offered his thoughts on the differences in riding styles that comes from the rubber underneath you.

“The biggest difference is the drop off in laptime with a Pirelli is significant. In the hotter temperatures at Suzuka it’s quite difficult to mange that,” said Laverty. “In Europe the temperature isn’t quite as hot so you can compete. Here in Japan it’s so hot and you can hammer a Bridgestone. The harder you work a Bridgestone front tyre the better it performs, you can spin a rear tyre for a full 27 lap stint and it doesn’t drop off the pace. We have to contend with a big drop off on the Pirelli and we’re spinning a lot here and at the front, in these temperatures, it’s a good tyre but I know what the Bridgestone is like from MotoGP and it’s a bit firmer in the heat.”

The fabled Bridgestone front tyre, otherwise known as “the one that got away” for riders forced to ride another brand of tyres, is world renowned for the confidence it inspires. When Michelin first returned to MotoGP in 2016 riders lamented the loss of this tyre from their lives. The Bridgestone front tyre is unlike any other. Black, round and full of rubber doesn’t describe it at all. It was very rigid and kept its position very well. It generates confidence under braking with that stability and it allow riders to set the corner up as early as possible. From entering the braking zone to releasing the brake it allows riders to be smoother because you don’t feel as much of a transition from one phase to the next of the corner as the bike loads.

“The way in which a Bridgestone steers when the rear is sliding is incredibly impressive,” continued Laverty. “Looking at Dunlop Curve, for example, the Bridgestone riders can spin it up towards the grass and we’re three metres wider through there. No matter what I do on the bike I can’t get it to turn to that point on the track. That’s what you can do with a Bridgestone. It’s a different riding style with these tyres.”

For Guintoli the challenge of the different brands of tyres has been huge in recent years. For examplein 2017 he was riding full-time in the British Superbike championship on Pirelli tyres, with minimal electronics, and his experience of the Italian tyre was of little help because the specification of machinery and the layout of tracks was so different. In addition to this he raced and tested for the Suzuki MotoGP squad on Michelin tyres and rode at Suzuka with his Bridgestone shod Suzuki. This year the former WorldSBK champion is a full-time MotoGP test rider and racing at Suzuka once again for Yoshimura Suzuki.

“All three tyres are really good and they’ve all got their own strengths and weaknesses,” said the Frenchman. “You need to get the best out of each of them and they’re all different for this. Certain tyres require certain riding techniques and of course they all feel different to one another but also most tyres feel different. Even within the same tyre brand you can have a different feeling with a different compound or construction of tyre.

“2017 was really interesting for me because I rode Pirelli’s in British Superbike, Bridgestone’s for Suzuki at Suzuka and I also rode Michelin’s in MotoGP. Some of them work better in the cold, some in the hot so you have a lot to think about when you’re riding. You ride every tyre based on the feeling from them and of course for a pure riding performance it’s always better to ride only one tyre because you can concentrate on how to get the most from it.

“I think it’s really good to experience such a wide range of tyres and regulations-BSB with Pirelli’s and no electronics, WorldSBK with Pirelli and electronics, Bridgestone with an Endurance bike and Michelin with a MotoGP bike. They all work differently with the different specification of bike too so it’s been interesting for me to do this much riding with them.”

The Bridgestone tyre used at Suzuka is very similar to that used in MotoGP in 2015, the Pirelli is similar in feeling to their WorldSBK offering. The Italian firm are keen to increase their footing in the Endurance World Championship but understand that breaking the Bridgestone monopoly at the front of the Suzuka 8 Hours field will be almost impossible. The experience of the Japanese manufacturers around the Japanese circuit with Japanese tyres is simply too much to overcome in the near future.