‘Over the moon’ Parkes pulls off slick trick 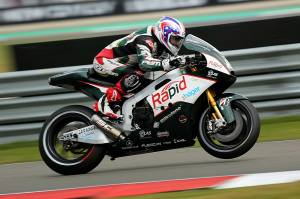 Broc Parkes claimed the second points of his MotoGP career with a superb ride in difficult conditions at the Dutch TT. The PBM rider took advantage of difficult circumstances to battle with the Factory riders mid race before eventually settling for 11th at the flag and five valuable points to add to his season opening score in Qatar.

The Australian had looked set for a very different race when a his bike failed to start on the way to the dummy grid. His bad luck continued with a crash on the formation lap at turn four having appeared to have scuppered any chance of a strong result. With the bike unable to restart Parkes had to run back to the pits and jump onto his spare bike and start the race from the pitlane after the rest of the field had already started. 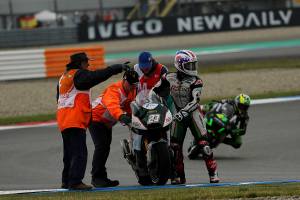 “I had a problem with one bike and it didn’t run at the start [on the way to the dummy grid],” said Parkes. “Then later into Turn 4 everyone went into the corner and Hernandez just stopped and everyone jammed the brakes on and someone hit my arm and down I went. Afterwards the bike wouldn’t run so I had to run back to the pitlane and jump on the spare bike but luckily it had slicks on it.”

With slick tyres fitted to his spare bike Parkes was one of the few riders who braved the early conditions with a dry setup but as the field pitted for slicks the race came towards the PBM rider and he was able to take advantage of his familiarity to briefly set the fast lap of the race:

“I already had a good flow when people got onto the dry tyres and it took them a few laps to get good. I was hanging in there with the top guys and even managed to pass them but I think that they got a bit upset with me and put some hard moves to try and get me to go away! I’m over the moon because this is my best result and to show the pace on the dry tyres shows the progress we’ve made over the last couple of races.” 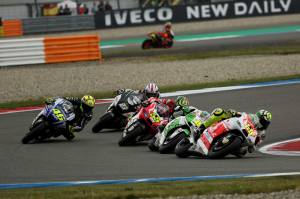 At one point Parkes was running in sixth and fighting with the likes of Bautista, Rossi, Crutchlow and Iannone and afterwards Parkes spoke about fighting with those riders and then trying to hold of Smith and Bradl to the flag:

“It was pretty cool to fight with them and even though they’re bikes are so much faster in the straights it was nice to pass them a couple of times so it was a nice feeling. The conditions were all over the place but, to be fair, we had really good pace compared to the other guys. If we didn’t have the pace in the dry we wouldn’t have been able to maintain the position.” 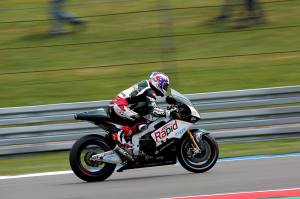 Parkes has had a difficult start to his MotoGP career with a series of difficult races but a strong showing in the Catalan Grand Prix gave hope that he had turned the corner and at Assen he proved his pace in the dry and it was clearly a relief to have shown his potential today:

“I think that this is a track that I know and one that I’ve done well at so after coming off Catalunya I was hoping to come here and do what we’ve done. It shows the positive things that we’ve done and that hopefully we can be closer to the customer Honda’s in the future.”