Fourth place for Andrea Dovizioso in FP3 gave the Italian a lot of hope that he could have a strong race this weekend. Dovizioso has been consistently fast on the soft tyre but after the session he stressed that the speed and consistency that he has shown on the harder tyre, the same tyre that the majority of the field will race on Sunday, is the most encouraging thing for him.

Speaking after FP3 the Italian said:

“I’m really happy with the position but especially because my times on the hard tyre, that everyone will use in the race, we were very close to the fastest riders,” said Dovizioso. “This is the key point and the reason that I’m happy. It’ll be very difficult to keep this laptime for 22 laps and I think that this will be our limit but I’m happy with the improvement that we made compared to last year. We are fast on both tyres and I think qualifying will be interesting.”

While many have spoken about the advantages of being able to run the Ducati with four extra litres of fuel Dovizioso commented the difference in fuel levels to last year was minimal and that the improvements seen this weekend have come about as a result of changes to the bike and engine by Gigi Dall’igna: 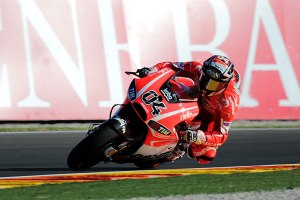 “We are really fast on the main straight because our engine improved from last year and it’s not really the fuel. The fuel makes a little difference but it’s so small because we have almost the same fuel so the improvement is the changes that Gigi made in the winter and not the new rules.”

When asked by Crash.net about the level of fuel that he expects to start the race with Dovizioso said that a decision had not been made but that he expects to run with race fuel in FP4 to get an understanding of what to expect on the opening lap.

“We will analyse all the practice sessions to see how much extra fuel we will use. I hope that in FP4 we will start with the fuel that we will race with and I want to check how the bike will react [on full tanks] and to simulate the first part of the race.”

Dovizioso also commented that while Ducati is allowed to run with 24 litres of fuel the fuel tank is not large enough for such a capacity with 22-23 litres the maximum.