Edwards having to adapt to Open Yamaha 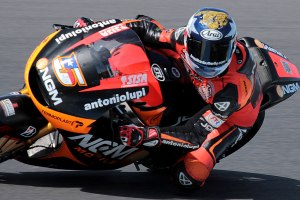 Colin Edwards wasn’t able to match the pace of his teammate, Aleix Espargaro, on Thursday night in Qatar but the American was pleased with his performance in setting the eighth fastest time as he continues to get to grips with the Open Yamaha.

Edwards, 1.5s off the pace, admitted that the soft tyre was not a useable option during the session so he spent most of the evening running the harder tyre:

“The bike is working good and I tried the soft tyre in the beginning and it’s definitely not a race tyre,” said Edwards. “I can do two or three laps on it, and we did our fastest lap on the hard tyre. It feels pretty good maybe it’s got a little less traction than the test but it’s only a small problem. The last corner was really dirty after the Hernandez crash but overall it was a good session.

“The rear just spins and you’ve no grip on the soft tyre. It drops so far below the hard tyres performance that you’re better off just racing on the hard tyre. I could get two good laps in qualifying on the soft tyre. The first lap should be the best and but I might have to change my strategy a little bit in qualifying and go out of the box and do my lap instead of using the second lap for my fast time.”

Throughout the winter Edwards has struggled to adapt the Forward Racing bike to his style of riding but at the Qatar test and this weekend he has instead tried to adapt his style to get more from the bike:

“I have improved and changed everything I ever knew about turning a motorcycle! There was no point in trying to turn the bike into something that I wanted that it wouldn’t do. We tried everything-bars, rideheights, etc-and we spent both Malaysian tests doing that and wasting time so when we got here I decided that I needed to change and ride the bike on the rear like Jorge does. Your lines are different and your philosophy about entry speed is different, it’s hard to change after 22 years but it’s becoming more natural. Maybe on Sunday in the race I’ll go back to my instincts but the idea is to focus and ride it like it needs to be ridden.”

While Espargaro said during Wednesday’s press conference that he does not plan to ride the FTR chassis throughout the season Edwards still plans to test the British built chassis soon. Having ridden their chassis in recent years Edwards has seen it improve and the direction of chassis development is something that he has seen move in a direction more towards his own style rather than the Lorenzo-centric Yamaha chassis.

When asked by Crash.net about the timeframe for using the FTR chassis for the first time and his thoughts on their development of the package Edwards said:

“They are saying sometime around Jerez. The whole plan of this project was to combine the Yamaha engine with the FTR chassis so I’m game. I still feel that I’ve issues turning this bike and when I look at last year’s data compared to this year’s there are corners I was faster last year because it would turn like I wanted it to. I believe that what we have is a good package but I won’t rule out testing the FTR chassis. I think the overall chassis theory-flex, geometry-that they used last year I was OK with last year and all they have to do is fit this engine and then we’ll go from there. “