Posted on November 8, 2013 by Stephen English 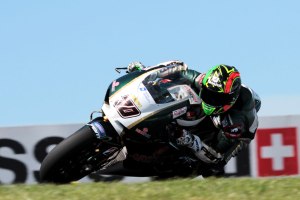 The tight and twisty confines of the Ricardo Tormo circuit in Valencia makes it one of the more suitable tracks on the MotoGP calendar for the CRT riders. Sunday’s season ending Grand Prix should provide the riders in the class the chance to get closer to the factory prototype riders than has been the case in recent races where having top end speed was a major advantage.

For PBM’s Michael Laverty this weekend offers one last chance in 2013 to show his potential aboard the ART chassis that he switched to at the Aragon Grand Prix in September. The Ulsterman has been unlucky since then with crashes in Aragon and Sepang, the lack of running at Motegi due to adverse weather throughout the weekend and the unique situation at Philip Island having transpired against the PBM team: 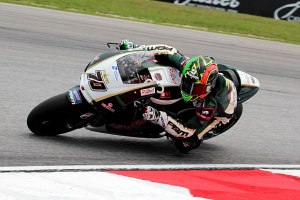 “Australia was a nightmare with changing bikes, Motegi was strange with the weather and not having any running until Saturday evening,” said the rookie. “We haven’t had a good crack at it since we’ve gone with the ART so fingers crossed we get a decent weekend this weekend.

“I’m looking forward to coming back to a track that I know, I raced here in 2003 in European Super Stock, and did a one off before starting Supersports in the UK. It’s changed since then, it’s been resurfaced, but I had a look around and it looks like it should be a good track for the CRTs. On the front and back straights we’ll get eaten up but we might be able to stay within two seconds a lap of the prototypes. I’m looking forward to it, I haven’t had the best of luck since I got onto the ART bike but if things go right and we have a straight weekend we should be in with a shot of the points and finish the season strongly.”

While the recent trio of races-Malaysia, Australia and Japan-were difficult on track for Laverty he admitted that being involved in fly away races for the first time in his career and spending almost four weeks on the road was an enjoyable experience:

“The fly away races were good experience and good fun. They were quite sociable and it allows you to get know the other guys in the paddock a bit more. When you’re at the European races everyone is in their hospitalities or motorhomes so it was fun.”