A ride through penalty for jumping the start cost Colin Edwards dearly at Sepang with the American eventually having to settle for just one point after what he thought was the ” best race I ever had” at Sepang.

The Forward Racing rider has consistently been the closest challenger to Aleix Espargaro of late to finish as the leading CRT rider and at Sepang he thought that once again he had the race pace to fight for the top ten:

“When you look at the laptimes we could have been top CRT and it was probably the best race I ever had here,” said the Texan. “We had the bike working week and the team worked their asses of to get the electronics and chassis right. I just want to get out of here and get to Australia.”

When asked about the jump start Edwards was clearly annoyed with himself for making such a costly mistake: 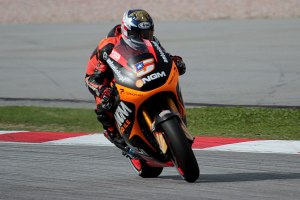 “It was the first time that I ever jumped the start. I don’t know what happened. I think that I blinked and then I flinched and I knew as soon as the light went out. I did my ride throughout and then gave it everything I had.”

He fought his way back to the points by the end of the race but with just two laps to go he was lucky that his race did not end with a crash. Having just moved into 14th position he lost the front at turn seven and was very lucky not to crash:

“Once I got by Barbera and Petrucci the last lap and a half at turn seven I was trying to put a couple of metres to the guys behind me and the bike completely tucked and I was about to let go of it but I went across the astroturf, the concrete and then back across the astroturf but they both had got around me. At the last corner Petrucci ran a bit deep and I got past him so at least we got a point. I had a good race pace so it’s disappointing.”