McLaren’s Jenson Button and Sergio Perez waded into the debate on driver penalty points with both drivers giving their qualified backing.
Button, the 2009 world champion and a key figure on the Grand Prix Drivers Association, viewed it as a positive step to reduce dangerous driving in Formula 1 but didn’t give his full backing to it because of the current complication nature of the proposal.
When asked for his thoughts on how the 12 points would equate to four three point penalties Button said:
“From what I’ve seen it won’t be a case of four accidents give you a ban, you could get five points for an incident,” Button told the media including Crash.net. “It’s quite complicated so there’s a lot to go through. I personally think it’s a good idea. We should be punished for mistakes and dangerous driving. I agree with a lot of it but I think that the GPDA needs to discuss our feelings on it.” 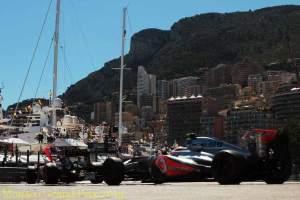 His teammate, Sergio Perez, has been very combative so far in 2013 and was involved in some controversial incidents last year-notably when Pastor Maldonado crashed into him at Silverstone last year-and the Mexican feels that consistency is key to the new regulation:
“I think that if you can help consistency it’s a good thing for all of us,” said the Mexican.
His team principal, Martin Whitmarsh, gave the perspective of each of the teams by again stressing the importance of consistency and transparency:
“It has the advantage of being clear and straight forward but we need to make sure we have consistent and objective scrutiny of the stewards,” commented Whitmarsh. “The introduction of the driver to the stewards has been very positive in this but I’m a bit worried that it could be artificial int he championship if someone gets close to that limit.”
0.000000 0.000000