Will we see an early end to 2013 development war? 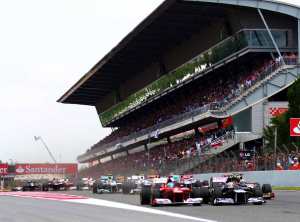 It’s always said that the start of the European season is when the “development war” begins. Each team will bring a host of upgrades to Barcelona and their hopes of success for the rest of the season will depend greatly on the success or failure of these new parts.

In the early season races we see an under performing team principal state that “it’s only when we get to Barcelona that we’ll know for sure where we stand.” Counterparts of the pace setters will opine that “it’s a good start but wait until the European season for the dust to settle.”

Barcelona is now in the books and the dust has settled. We are at the quarter mark of the 2013 season and certain truths can now be cemented. There are three teams that will continue to be in contention for race wins, there is one team that has the single lap pace to be a contender but cannot maintain tyre life and there are some surprise packages.

Ferrari, Red Bull and Lotus have carved out the opening five races between them and their cars are clearly the most balanced on the grid. Each has shown competitive single lap pace in qualifying but, far more importantly, their race pace is competitive and they are showing that they can make the most of the Pirelli tyres. Whether this means being easy on the tyres, as shown by Raikkonen’s Australian victory, or racing aggressively, as illustrated by Fernando Alonso’s Spanish victory, these team’s have flexible cars that allow them to run at the front.

Mercedes has started the year with three consecutive pole positions and both Lewis Hamilton and Nico Rosberg have stood on the podium. They have exceeded their targets for the early races to a huge degree. However, in doing so the sense of pressure and expectation has also evolved on the Brackley based team.

When the car was launched if the team was offered the success that they have enjoyed thus far they would have jumped at the opportunity. Now there has to be a sense of disappointment that their race pace is so poor relative to the one lap speed. The goalposts have moved for Mercedes and suddenly it is not enough for them to show that they are competitive in qualifying; now they must replicate that success in races.

Finding a way to manage the Pirelli rubber in race stints is the only way that they can do this and a cursory look at the team’s history, in their various guises, will not make for comfortable reading for Hamilton and Rosberg.

Even as Brawn GP when Jenson Button won the Drivers’ Championship and the team the Constructors’’ crown once the team’s had gotten to Europe the ghost was nearly up and Red Bull quickly became the pace setter. The team has employed a huge amount of talent in their technical offices over the last 12 months so a change in fortunes shouldn’t be discounted but until they offer evidence of progressive development as the season wears on it is likely that front row starts and podiums will be distant memories for Hamilton and Rosberg.

Behind the leading four there is a big gulf in class at the minute. Force India have been the most consistent of the midfield runners and their fight with McLaren could develop into something very interesting in the coming races.

Force India’s car is a solid performer and it has worked well in a large variance of conditions. In Australia Adrian Sutil utilised a contrarian strategy to lead the race before finishing seventh, just ahead of his teammate Paul di Resta. Since then the Scot has been in the ascendancy with strong race pace in China, Bahrain and last weekend in Spain.

Unlike previous years the car is working on a variety of tracks and is now a consistent point scorer. Maintaining this momentum is crucial for the team in a number of ways but with Vijay Mallya’s legal and financial difficulties well known.

With Mallya forced to deal with his Kingfisher empire the future of the team is clearly clouded. Even though the majority of his businesses, Kingfisher brewery for example, are unaffected by the issues affecting Kingfisher Airlines it is clear that maintaining ownership of the team may become untenable for Mallya further down the line. If this does develop into the case it is clear that fielding as competitive a car as possible to the best strategy for the team. 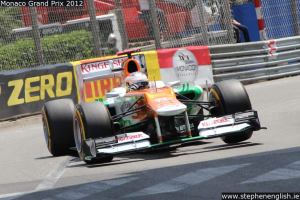 If they can finish sixth in the Constructors’ Championship, and earn extra prize money as a result, the sale of the team would be much more attractive to perspective buyers. The car has a solid base with which development can take place and with McLaren struggling so badly it might be possible for the team to maintain their position in the championship.

With the new regulations on their way Force India might be in the middle of a perfect storm for them to finish sixth in the championship. Team at the back of the grid will focus on next season’s car while Force India, possibly looking to improve their stock to perspective buyers, would be in a position to think about this season.

McLaren’s struggle also plays into this hand also. The Woking team started the year tipped as the likely champions but their car is off the pace and looks unlikely to be even a podium contender in any of the upcoming races. With the introduction of turbo engines and other new regulations for next season the team might view it as wise to make an early switch in focus and try and gain an advantage on their likely title rivals next season.

With Lotus, Red Bull and Ferrari all likely to be involved in the title fight until the closing stages of 2013, and therefore having to spend a lot of their R&D capacity on the current car, McLaren could use this season’s struggles to their advantage. Of course the team is filled with ultra competitive people so making the change this early in 2013 is not going to happen but it has to be something that will be discussed within the team over the next month.

Maybe shifting their development focus to have a major upgrade for the British or German Grand Prix and then allow the team to start to focus on the MP4-29 in the second half of the campaign?

Finishing seventh in the Constructors’ Championship would obviously not sit well with anybody at the McLaren Technology Centre but a short term loss for a long term gain may mean that it is the prudent decision. For a team like McLaren, accustomed to winning races and challenging for titles, does it really make a huge difference whether they finish sixth or seventh in 2013?

Financial realities might come into play given that Vodafone are leaving as title sponsor with no replacement having been named but with Sergio Perez on board a switch from one telecoms company to another, Telcel, would be very easy.

Behind Force India and McLaren is the trio of Sauber, Toro Rosso and Williams. Each has had a difficult start to the campaign but with Sauber only capable of fielding one driver that is legitimately capable of scoring points, Nico Hulkenberg, it will be impossible for the team to match Sauber and McLaren over the course of a gruelling 19 race season.

Better to focus on 2014 for the Swiss based team when, hopefully, Esteban Gutierrez will be experienced enough to be a challenger. It would be surprising if by mid-season Sauber was not winding down the development of their car and starting to focus on next season. Their target will be to beat Toro Rosso to eighth in the Constructors’ standings. 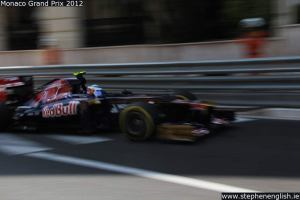 Toro Rosso on the other hand is stuck in no man’s land. They have a long standing agreement with Ferrari but their parent team, Red Bull, want to have them supplied by Red Bull to allow for greater consistency between the two teams. As a result Toro Rosso does not know the dimensions, weights and other specs of the 2014 engine at the moment. With the Ferrari and Renault possibly having major differences from one unit to the other it would be dangerous to focus development on the new car until an engine deal is confirmed. Therefore maintaining a parallel development of both cars is the most likely outcome for the team. This could allow them to beat Sauber to eighth in the Constructors’ Championship should their rivals focus on next year’s car early in proceedings.

At Williams, Caterham and Marussia the season is already taking on the appearances of a lost cause. The optimism of the winter is now not to be seen at Williams and while they will continue to bring updates to the car a change of priorities will inevitably happen once we get to the midpoint of the campaign.

At Caterham and Marussia both team’s entered the season with the expectation that iterative developments would be made to the cars but ultimately the focus was on next season.

The 2013 season may have only reached the quarter mark but already there is cause at numerous teams’ to start focusing on next season and the opportunity of making a jump on their rivals.