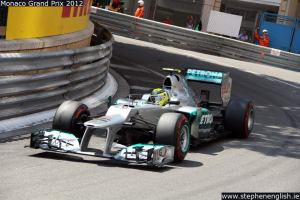 Nico Rosberg will start from pole position for the Spanish Grand Prix after a superb qualifying effort from the Mercedes team.

Rosberg, who was also the pole sitter in China, will lineup ahead of his teammate, Lewis Hamilton, after a silver arrows lockout of the front row. Hamilton, who had set the pace in the Q1 and Q2 sessions, was impressive throughout but ultimately unable to match Rosberg’s speed.

The Mercedes has been impressive so far over a single lap in 2013. the team now has had three consecutive pole positions, but they have struggled to mate that speed with consistent race performances. Until the team can show that they have improved their tyre wear it is likely that we will see Rosberg and Hamilton struggle tomorrow.

The pole sitter admitted that there are still unknowns about how the car will manage to get through the race tomorrow:

“It’s a great feeling to be on pole again,” said Rosberg. “So far this weekend has been very positive and it’s a pleasure to see that the team is improving and fighting through the problems together. However, we know that this is only half of the job completed and have the painful memory of what happened in Bahrain to prove that.

“We’ve worked very hard on our race pace but this track is tough for the tyres, particularly with graining. So it will be a big challenge tomorrow and our goal is to make the most of the opportunity we have from starting at the front and get a strong result for the team.”

Sebastian Vettel will start third but history is against the reigning champion from repeating his 2011 victory; the Spanish GP has been won from pole position the last 16 years. Even the Red Bull continues to look incredibly well balanced in the fast corners, through turn nine Vettel was immense, but in the slower corners he was visibly having to hustle the car through the apex. If this continues tomorrow he might even struggle to finish on the rostrum.

Speaking after the session Vettel admitted that the outcome of their tyre gamble will only become known tomorrow:

“We had a pretty smooth qualifying session,” said the German. “We took a slightly different approach to some others using option tyres only – whether that helps us tomorrow we‘ll have to wait and see, but it will be an interesting race and a lot will be about tyre degradation.”

Kimi Raikkonen will start fourth even though Lotus racer was one of the few drivers to attempt two runs in Q3. Speaking after the session the Finn was satisfied with his effort but expects the race to come to him due to the superior tyre wear of the Lotus:

“I didn’t make any mistakes on my fastest lap so that was pretty much all there was to come from the car,” said the 2007 world champion. “I wouldn’t say it was a perfect lap, but I don’t think we would have been much higher up the order if it had been. The Mercedes, as we’ve seen before, seems to be pretty fast in qualifying but hopefully in the race we can turn it around.”

Home favourite, Fernando Alonso, will start from fifth having matched his expectations for the session but the double champion is expecting a much better performance on race day:

“It’s a well known fact that Saturday afternoon is our weak point and fifth place is more or less what we were expecting,” admitted Alonso. “We were well aware that Red Bull and Mercedes would both be very strong, but while it’s true we have to start taking back points on Vettel, we are not too scared of Mercedes, who usually have higher tyre degradation.”

The qualifying fight between the Ferrari’s was close with Alonso outqualifyied his teammate, Felipe Massa, by just one thousand of a second. However, the Brazilian will be penalised three places on the grid for blocking Mark Webber in the Q2 session. After hearing of the stewards decision a rueful Massa said:

“It was not my intention to get in his way and in all honesty I can’t recall it having affected his qualifying,” commented the Brazilian.. When I saw him in the mirrors, I thought I’d get through the corner before letting him by, which was the only course of action at such a narrow point. On top of that, he was on worn tyres at the time and I don’t think he was doing a quick lap.”

As a result Romain Grosjean, a podium finisher in Bahrain, will move up one place and join Alonso on the third row with an underwhelming Mark Webber and Sergio Perez also elevated. For Grosjean the qualifying session was quite successful but a small mistake on his final lap of Q3 meant that he did not push hard on his fastest lap and as a result may have saved some crucial tyre life for his opening stint.

Webber, who is traditionally strong in Barcelona, struggled in Q3 with rear tyre wear.

“Qualifying went well today apart from Q3,” said the 2010 race winner. “I was disappointed with the lap in Q3 and lost a lot of time in the last sector; I’m normally quite strong there, but I was in trouble with the rears. It’s a sensitive game these days and you need to get everything lined up. So, in the end I’m disappointed with the last lap, but everything else I was happy with. It will be an interesting race tomorrow.”

Perez did well to get into Q3 and managed to pip Paul di Resta for the ninth fastest time. Tomorrow’s race should once again play into the Force India driver’s hands. With tyre wear sure to be high the Scot will once again be looking to play the strategic trump cards and claim some more points:

“I think we can feel pretty pleased with tenth because we achieved our target of reaching Q3,” said di Resta. “I did not quite get the maximum from Q3, because it was difficult to optimise the final sector on my out lap, but we are still in a good position for the race. Tyre wear will play a big role tomorrow because this place is one of the hardest tracks for the tyres. Hopefully that will work to our advantage.”

When Q3 started Rosberg was the pace setter from the off with the German leading the way after the first set of laps ahead of Alonso and the Ferrari’s and Lotus’ with the remaining runners all staying in the pits and electing to have just one timed run in the final ten minutes.

In Q2 Hamilton left it late to vault to the top of the time sheets. The Englishman set a stunning lap at the death of the session to jump from the drop zone to the fastest and repeat his feat as the fastest man in Q1. Fernando Alonso had been at the top of the times during the session after beating the best of Kimi Raikkonen but ultimately Hamilton and Vettel wound up ahead of him.

Paul di Resta was the man on the bubble at the end of the 15 minute session with the Scot making it through to the final ten minutes. Daniel Ricciardo was not so lucky but the Australian will be pleased with his effort in 11th and will have the choice of tyres ahead of tomorrow’s Grand Prix.

Speaking afterwards the Australian said: “I was pleased with the way the session went overall, particularly Q2 and I think we got the most we could out of the car.”

His view of getting the maximum from the car was backed up by the fact that it will be an all Toro Rosso sixth row of the grid with Jean-Eric Vergne just behind his teammate. The Frenchman was very optimistic after the session saying, “There are a lot of positives to take from this afternoon, starting with the fact my car’s set-up will be even better suited to race conditions than to qualifying. Twelfth is a good place to start and points should be on the agenda tomorrow.”

The session did little to improve the fortunes of Jenson Button with the Englishman languishing down in 14th on the grid after another difficult session. The McLaren continues to be out of sorts in the hands of Button and he uncustomarily was seen locking up his front tyres on his final lap. Afterwards Button commented that there may have been an issue with his tyre pressures.

The former champion was pushing hard but obviously fighting a losing battle with a car that offers little in the way of confidence building handling. Button will be joined on the seventh row by Adrian Sutil. It was not all bad for the Woking squad however with Sergio Perez setting the seventh fastest time in Q2. After the session Button paid credit to his teammate by saying:

“Checo did a great job, particularly in Q2,” said Button. “It showed that some of our recent upgrades are definitely working. It’s not yet enough, but it’s rewarding to see that we’re making some progress. For me, the car felt okay in Q1, but, in Q2, I couldn’t find the grip for my final run. It felt as though the tyre pressures may have been too high, but to be honest we’re not yet quite sure exactly what happened.”

A year ago Pastor Maldonado qualified on pole position for the Spanish Grand Prix. Tomorrow the Venezuelan will start 18th after missing the Q1 cut. He will line up behind of his teammate, Valterri Bottas, and the Caterham and Marussia drivers. Speaking afterwards a clearly downcast Maldonado said:

“We’re having a difficult time with the car at the moment, but we have been working very hard to improve things,” commented the Williams driver. “We were missing a lot of grip which made it difficult to get a good time today. In terms of performance, we’re not there but we will keep focusing on the work needed to move us up the grid.”

It was a very promising session for Giedo van der Garde with the rookie outqualifying his more experienced Caterham teammate, Charles Pic, as well as both Marussia’s. Afterwards van der Garde said, “I’m obviously really pleased with how today’s gone,” said the Dutch. “We made a few changes to the car overnight to try and find a balance with the new parts and it’s worked out really well.”

Those Caterham upgrades, new rear wings and other aerodynamic updates, clearly gave the team a boast in Bahrain and they now need to maintain that momentum tomorrow. Bianchi, who has enjoyed a very promising start to his F1 career struggled with his cars handling today but is looking ahead to tomorrow’s race and improving:

“We found more grip but the car is still not well-balanced and this is the most I could get from it today,” admitted Bianchi. “The balance was quite variable in the first and last sector on different laps and I’m still not happy in the high-speed corners.We need a good start to get ahead of Van der Garde but I think we will see some improvement tomorrow in terms of our race pace.”

Van der Garde was less than a tenth faster than Jules Bianchi but comfortably quicker than Max Chilton and Pic. For Pic it was a disappointing session with the Frenchman clearly not able to come to terms with his car and complaining afterwards that he couldn’t control the back end.