Lotus aims for the championship with 2013 challenger 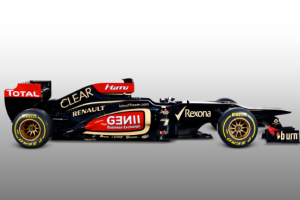 The Formula 1 launch season is upon with Lotus the first to unveil their 2013 challenger.

The Enstone based squad enjoyed a very competitive campaign last year with Kimi Riakkonen winning in Abu Dhabi and a championship challenger until late in the year. From the start of 2012 the team looked competitive but for much of the year they seemed unable to make the step from permanent podium challenger to race winner.

It was ironic that Raikkonen’s victory in the desert marked the beginning of the end of the his championship challenge but the team are clearly in their most competitive position since Fernando Alonso’s title winning years in 2005 and 2006.

For team principal, Eric Boullier, the target is clear for the coming season:

“We know how to win championships, but it is a while since we have won so we are very eager to taste glory again,” says team boss Eric Boullier. “We have a fantastic facility at Enstone and one which has benefitted from significant and strategic investment over the past couple of years. We have a highly accomplished technical and design team who last year produced a fantastic car, the E20.

“The E21 builds on this. We have a superb driver line-up with the 2007 champion, Kimi, and a hungry young gun in Romain. We have further strength in our partners and we are certainly primed and ready for action.”

The new car, the E21, looks to be a natural evolution of last year’s car but it will only be during testing that we see the car in its true form. As ever certain parts were covered or “launch parts” used so as not to tip their hat to rival teams as to their major developments.

The coming season is the final year of the existing regulations and as a result a certain amount of status quo is to be expected this year but for Technical Director, James Allison, there was still scope to find improvements on last year’s impressive campaign:

“We’ve done a lot,” said the Englishman. “There is a lot gone into it and it is going to be an exciting car. The rules for 2013 are very, very similar to 2012 so you can expect a lot of family resemblance from the 2012 car, but the devil is in the detail and it adds up to a significant amount of performance. There are lots of new ideas and same concepts we have been pushing on with for a few years.”

One aspect that the team will be eager to retain from last year’s campaign will be its ability to manage tyre wear. Last year Lotus were consistently, along with Sauber, the team most able to maximise tyre life and therefore improve strategic options. To achieve this the team seems to have retained a number of elements from last year’s successful car, including the suspension layout.

Interestingly for Lotus one area that they have open for development scope in 2013 will be the Coanada exhaust. This device tunnels exhaust gases towards the rear defuser and offers a tremendous increase in downforce. Last year they only ran in the end of season races so it will be an area to exploit in the development cycle of the E21.

Last year Raikkonen was an unknown quantity. Would he be instantly be on the pace or would it take him time to get back into the swing of racing? What transpired was that it took Kimi half a season to find his form in qualifying but in race trim he was instantly superb. Throughout the year he was a constant podium threat and it was surprising that he only took one victory.

For 2013 he is looking to continue building on their success of last year:

“2012 was a good start; let’s see what we can do in 2013,” said the former world champion. “It’s clear from working with them that they are racers, and you can see in their history that they’ve won championships. Nothing I saw last year made me think that another championship was impossible in the future. Of course, there is some pretty tough competition out there and everyone wants to win. The team has beaten everyone before and there’s nothing to say they can’t do it again.”