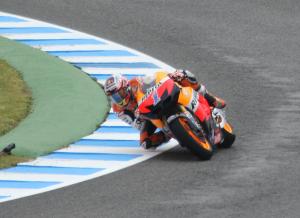 Casey Stoner could not put his arm pump woes from Qatar behind him at the Spanish Grand Prix but the reigning champion still managed to claim his first victory of the season.

The reigning world champion was plagued by the injury in the season opening race but while he still struggled with the condition at Jerez it was not as severe.

“It was nowhere near as bad as we had in Qatar but it was the same problem again,” said Stoner. “I was struggling to grip the bike to change direction. I’d put my body to the other side of the bike and pull myself forward to get the weight transfer of the bike [to turn].”

With the weekend having been run in wet conditions the Australian never had the opportunity to test how his recovery had progressed, due to the lower g-forces, until the red lights went out to start the race.

It was a voyage of discovery for Stoner and when Jorge Lorenzo closed to within touching distance in the closing stages the question of Stoner’s fitness raised its head once again.

Ultimately there were no such problems and Stoner went on to claim the 41st victory of his career. The victory margin was almost one second but it does not tell the story of an exceptionally competitive race which saw Stoner and Lorenzo race together throughout the 27 lap distance.

The pair had a slight edge over Dani Pedrosa and Cal Crutchlow but with the gap to third diminishing in the closing stages there was no prospect of the leaders easing up towards the finish of the race.

On the penultimate lap Lorenzo made his move but Stoner defended it perfectly and the final lap saw the Australian pull away. With Pedrosa finishing third the championship battle is close with the trio separated by nine points following their monopoly of the podium positions thus far in 2012.

Crutchlow had another exceptional performance with the Englishman finishing within 2.5s of Stoner and claiming another fourth place finish. With his teammate, Andrea Dovizioso, 15s behind him Crutchlow has started to make a firm case already for Tech 3 to retain him alongside Bradley Smith in the premier class next season.

In the opening stages of the race Crutchlow was at his combative best but out braking himself into the Dry Sac Hairpin at the end of the back straight he was lucky to stay upright.

Sometimes a rider needs a little bit of luck and with Crutchlow riding as well as he is there is no doubt that he deserved it. A first Grand Prix podium looks to be around the corner for the Englishman.

Alvaro Bautista trailed Dovizioso to the flag to claim sixth place with Stefan Bradl seventh after another impressive performance from the rookie.

Bradl’s easy adaption to the premier class bike has seen him ride well at both Qatar and here at Jerez. Following his Moto2 championship success last season much was expected of Bradl but he has exceeded expectation riding the LCR Honda so far in his opening two MotoGP outings.

Speaking after qualifying Nicky Hayden said that in the dry he knew that “our best isn’t as good as their best” but following a promising start to the race the American’s pace fell away.

Riding in the lead group and battling hard with Pedrosa had seen Hayden run in third for the early stages but at quarter distance he seemed to lose confidence in the front end and his pace fell away.

Finishing eighth will be a disappointment for Hayden but his front row qualifying effort and once again outpacing Valentino Rossi in the race will still give him reason to look forward to the Portuguese Grand Prix next weekend.

Rossi finished the race six seconds behind his teammate but it was actually an encouraging race for the Italian.

He battled hard with Hector Barbera throughout and Rossi looked much happier with the front end of his Ducati. Whether he can transfer this to the coming races remains to be seen but it was encouraging to see him finally make progress aboard the Ducati.

Ben Spies however will have little reason for optimism following another poor outing. The Texan was once again the lowest finishing prototype rider and finished the race almost 40s behind Stoner.

On the final lap of the race Randy de Puniet pulled off to retire from a strong 12th position and leading CRT runner. His Aspar teammate, Aleix Espargaro, would claim the honour of being the leading production based engine runner home.