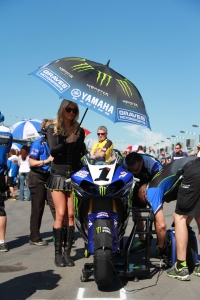 Reigning champion Josh Hayes served notice of his intention for his title defence with a dominant victory in the season opening race of the AMA Superbike championship at the Daytona Motor Speedway.

The Mississippi native was consistently half a second per lap quicker through the race after qualifying on pole position. The only blip on Hayes outing was losing the lead at the start after his teammate, Josh Herrin, took the hole shot. Hayes did not wait to take the lead once again after overtaking Herrin half way through the opening lap.

For Herrin the day was to get much worse with the Daytona rookie sidelined at half distance after a technical problem. That left Blake Young with the unenviable job of trying to close the gap to Hayes. Ultimately there was little that Young could do aboard his Suzuki to keep on terms with the leading Monster Yamaha. Hayes consistency allowed him to build an insurmountable lead in the first eight laps that gave him a comfortable victory at the flag.

From the midpoint onwards Hayes was in damage control mode and rolled back his pace by almost one second per lap but even with Hayes easing off he was still able to pull away from Young by almost ten seconds when he took the chequered flag.

“Man it was a fantastic day,” commented Hayes. “All the hard work of Monster Yamaha, all the long hours, the bike has improved so much from last year and today it shows.”

For Blake the moment was clearly a bitter disappointment. Having been a championship challenger last year finishing consistently on the rostrum is the target for the Yoshimura Suzuki rider but having been so clearly outclassed by Hayes it was clear that he knows that tomorrows race will a challenge to try and challenge Hayes during the Daytona 200.

“I think we need to make Yamaha work a bit harder tomorrow,” said the Wisconsin native. “I made a few mistakes and thought I’d have to push very hard and might have ended up on the ground [if I pushed any harder.]”

Roger Lee Hayden rounded off the podium after a strong race aboard the Jordan Suzuki.

Hayden was pleased after the race even though it was clear that the gap to Hayes was once again giving a rider cause for concern.

“We spent a lot of the off-season trying to close the gap to Josh but . It’s a good way to start the season on the podium but the gap to Blake and Josh was bigger than we would like,” said Hayden.