Can Danica Patrick succeed in NASCAR? 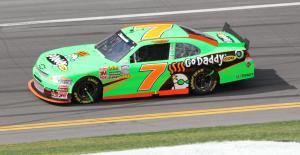 Dancia Patrick was the biggest story throughout the weekend at Daytona International Speedway with the 28 year old making her Sprint Cup debut in the Daytona 500.

She has a trying weekend with a series of accidents overshadowing the positives from a promising week. Taking pole position for the Nationwide race was clearly the highlight but a heavy crash in the Gatorade Duel and then crashes in the Nationwide and Sprint Cup races have left a more lasting impression on most fans.

Patrick’s speed was proven once more at Daytona but for her to achieve success in NASCAR she has to do something that very few single seater racers have been able to achieve: adapt to racing with a roof over their head. A NASCAR is much heavier than the Indy Car that Patrick is used to racing and to change your style of racing takes a lot of time. One of the prime examples of this is Juan Pablo Montoya.

Even though the Columbian is one of the most talented racers ever to grace Formula 1 he has struggled to adapt to the much heavier cars and the lack of technology available to him. Whereas in Formula 1 a driver can analyse their performance to incredible detail due to telemetry in NASCAR this practice is outlawed. When he was racing in Formula 1 Montoya was able to use the data traces to help form his plans for car setup and to give him feedback on his performance but now everything he does to improve his car comes from talking with his engineer at the end of each session.

This challenge means that a much higher degree of importance is placed on the relationship between a driver and his engineer rather than between a car and its software. Without the use of electronics in the car the defining element of performance is the driver’s talent and his ability to work with his car.

This is not to diminish the ability of Montoya, or other single seater drivers who have struggled to show the same speed with a roof over their heads, but rather to show just how much of a role experience plays in being successful. The leading Sprint Cut drivers-Jimmie Johnson, Tony Stewart, Kyle Busch-all grew up racing this type of car and have therefore a huge wealth of experience with which to draw upon.

The likes of Montoya do not have the same depth of knowledge and having spent so much of his career using telemetry it is no surprise that this change has been a challenge for him. However he is now entering his sixth season in the series so the time is nearing for him to finally progress. For this to occur Juan Pablo will have to finally develop a strong relationship with his race engineer.

It is in this light that Danica Patrick’s first full season of NASCAR racing should also be viewed. The 28 year old has raced in Indy Cars for the past seven years alongside a partial NASCAR schedule in the last two years. This year will see a move to the second tier Nationwide championship, along with ten Sprint Cup races, but there is also immense pressures being placed on her shoulders.

At Daytona the number of fans clamouring for her merchandise was immense and with NASCAR looking to tap into a new lucrative market, of female race fans, the sheer volume of media appearances and a massive advertising campaign featuring her has placed an even greater sense of expectation on her.

Patrick’s pole position in qualifying for the Nationwide race gave her a great opportunity to lay down a marker for the coming season but she struggled throughout the race and spent the majority of the opening section in the middle of the field trying to move to the front.

Ultimately a crash in the opening half of the race ended any chance of the first ever female pole sitter at Daytona to challenge for the win but it also showed that even though her speed isn’t in doubt her ability to race wheel to wheel in the pack still has question marks hanging over the roof of the number 7 GoDaddy.com Chevy.

In the crash that ended her race there was little that Danica could to avoid it but it showed once more that setting times while running on track on your own in qualifying is a very different challenge to racing against 42 other cars at speeds in excess of 200 mph.

In her Sprint Cup debut Patrick crashed on the second lap in the same accident that eliminated championship favourite, Jimmie Johnson. Again there was little chance of Patrick avoiding the crash but such an intrinsic skill of a NASCAR racer is the ability to avoid an accident. For Patrick it is crucial that she learns as soon as possible from her mentor, and triple champion, Tony Stewart that sometimes the best attack in NASCAR is not 100% all out attack but rather a more tactical approach.

It’s very interesting to see what is being expected of Patrick. In Indy Car racing she showed plenty of promise but ultimately a single race win in the series has to be seen as a very poor return given the machinery she has had at her disposal over the course of her career. Racing in recent years with Michael Andretti’s squad numerous teammates have won titles.

Compounding Danica’s struggles is the fact that drivers such as Montoya, Dario Franchetti and Sam Hornish Jr-all Indy Car champions-have struggled to show the same speed in NASCAR that they routinely displayed in single seater racing. For Patrick to buck this trend and become the racer that NASCAR need her to be will be an immense challenge. Can she do it?

Her speed is not in doubt but as Montoya has shown racing at the sharp end of the NASCAR field is a much bigger challenge than just having the ability to turn left and complete a fast lap in qualifying.