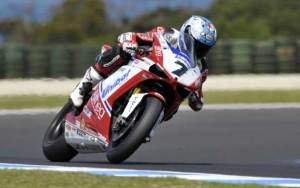 With practice and qualifying completed at Donington Park a clear picture has developed as to what to expect in tomorrow’s races. Carlos Checa once more dominated proceedings on his Ducati but with a more in depth look at his performance over the course of the weekend it is clear that he has utterly dominated in Derbyshire.

The Spaniard has continued his form from the opening race into round two and been consistently the most impressive man on the racetrack this weekend. A cursory look at the lap times from the course of each practice session shows that while his rivals have been able to compete with him in terms of ultimate pace, Checa has left them in his wake due to his incredible consistency.

As the table shows the championship leader has had more sub 1m28.5s laps than anyone else. These lap times show the ultimate pace of each rider but are not indicative of the actual pace that the rider will be able to achieve in tomorrow’s races.

As we saw in Philip Island World Superbikes has changed in recent years and instead of the hard charging races of the past a more intelligent approach is now needed to succeed. This has come about because of ex-MotoGP riders, such as Checa and Biaggi, coming into the series. The ex Grand Prix riders have a much greater understanding of setting a bike up, particularly the electronics, and maximising the bikes potential over the course of a race.

Whereas in the past there was a “rag ‘til it breaks” mentality in WSBK the success of more cerebral riders, Biaggi, Checa etc, there is now a much more businesslike approach to racing.  The leading lights now know that it is much more important to find the correct balance for the race instead of finding a perfect setup for one flat out Superpole lap.

The leading qualifiers, and the factory Yamaha riders, have all had relatively similar weekends in terms of their abilities to generate fast times. Each, with the exception of Eugene Laverty, has completed numerous sub 1m89s laps. Checa has the most of laps in this range but there is little to choose between him and his rivals.

It is in the next sector of lap times that Checa’s advantage over the field starts to be displayed. The Spaniard has completed more sub 1m29.5s laps than anyone else. The race pace should be in this timeframe for quite a large section of the race, probably over half distance, and as a result it is crucial for riders to be able to lap consistently in this range. 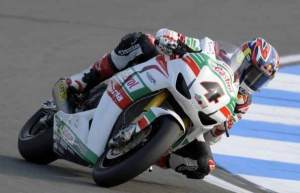 Riders such as Laverty, Rea and Haga have all struggled to lap consistently in this range and while each are exceptional racers they will need to spend a lot of time looking at their data if they are to find a solution in time for tomorrow’s race. Encouragingly for the likes of Jakub Smrz the Czech rider has been very consistent in this bracket and could be a challenger for the podium tomorrow if he can race with a clear head; far from a guarantee for the Ducati rider.

Tom Sykes fast lap in qualifying was good enough for the third fastest time but his ability to lap consistently in the 1m29s bracket could allow the Kawasaki rider to give the Japanese manufacturer a much needed lift. He has always excelled in front of his home crowd and it would be of little surprise to see him defeat compatriot Leon Haslam in the races due to the fact that he has clearly found a setup much more capable of consistent fast laps, even if Haslam has the faster bike in terms of ultimate pace. 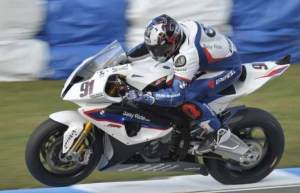 Haslam, riding for BMW, was very impressive in his 2010 title challenge aboard a Suzuki. The Englishman though showed that there are still quite a few rough edges to be smoothed over and one thing that he will need to improve is his ability to find the best compromise for race pace. It is clear that the BMW is still far from a perfect bike and as a result Haslam’s ability to qualify second is very commendable. However it seems that when the red lights go out he will have a very challenging race as he tries to keep riders like Sykes, Smrz and even Max Biaggi at bay.

While the riders around him at the start will have to contend with battling through to the front there is little to suggest that Checa will face any strong challenge from them for the duration of the race. The Spaniard looks to be incredibly confident right and is ready to rack up more wins this weekend. He has the fastest bike on the track but much more importantly he has the most consistently fast bike as well.

Checa has consistently been setting times in the sub 1m29.5s range while his rivals have been lagging a few tenths adrift of this pace. Biaggi had had a fast bike underneath him all weekend and while Superpole was a struggle for the champion he should be able to make it to the front and while it is unlikely that he will battle for the win with Checa it would be very unwise to underestimate Biaggi.