Checa takes race one at Philip Island with a dominant victory

Carlos Checa clinched the opening race of the World Superbike season with a dominant victory at Philip Island.

The Spaniard, starting from pole position, made a slow start and lost the lead to Eugene Laverty. The Irishman looked cool, calm and collected in race one but could do little on the third lap when Checa made his move into the Honda Hairpin. The Ducati rider jammed his bike inside Laverty at the apex leaving the rookie with no choice but to cede the position. From that point onwards Checa was not headed as he set about opening a controlling four second lead.

Reigning world champion, Max Biaggi, knew that if he was to have any chance of competing with Checa he needed to get past Laverty and break away from the pack. The Italian, starting second on the grid, managed to take second from Laverty on the fifth lap but already Checa was out of reach for the Aprilia rider. The Althea Ducati rider was able to consistently lap one or two tenths of a second faster than his rival and his victory was never in doubt.

On the sixth lap Leon Haslam, riding for BMW, overtook Laverty and the battle for the final podium spot quickly involved the likes of Jonathon Rea, Marco Melandri, Troy Corser and Michele Fabrizio. Rea has had a trying week in Australia and a mistake on lap 13 ended any hopes of a strong finish for the battered Irishman. Running wide at the Honda Hairpin the Castrol Honda rider fell from fifth to 13th and could only get past Leon Camier before the flag. 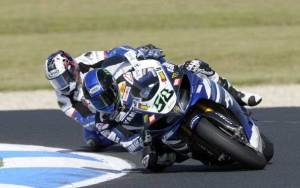 With the race drawing to a close Checa was comfortably clear at the front with Biaggi pulling away from Haslam leaving fight for the final spot on the rostrum as the main action on track. With four laps to go Corser dropped back, clearly hampered by tyre wear, and it was left to Haslam, Melandri, Laverty and Fabrizio to fight for the right to stand on the podium.

Haslam managed to do just enough to hold off his challengers but coming out of the final corner Laverty got  alongside his teammate, Melandri, and crossed the line just ahead of the Italian. It was a terrific debut in the WSBK class for Laverty but must have left a bitter taste in Melandri’s mouth.

Behind the battle for the podium Jakub Smrz had a strong run to seventh, just ahead of Tom Sykes and Nori Haga. Corser rounded out the top ten after plummeting down the order as the race drew to a close.

Race one was an inspired performance from Checa. The Spaniard has dominated proceedings in Victoria all weekend and winning the race so commandingly was just rewards for the hard work that the Althea Ducati squad have done throughout the winter to give Checa such a strong package.